The first humans to cultivate plants used irrigation thousands of years ago, but it wasn’t advanced like the irrigation used for farming, commercial sites, and residential lawns. Irrigation makes it possible to feed the planet and create farmland where growing crops wouldn’t ordinarily be possible.

According to the United States Geological Service, the earliest irrigation technique was probably a bucket:

“Ancient people must have been strong from having to haul buckets full of water to pour on their first plants. Pouring water on fields is still a common irrigation method today — but other, more efficient and mechanized methods are also used.”

That early irrigation technique is still around today as flood irrigation (or furrow irrigation) essentially means collecting water in a container and pouring it on the fields. Crops around the world are still irrigated in this way, and the modern technique often uses pumps to deliver water to the field.

One of the biggest reasons flood irrigation is still in use today is because it’s one of the least expensive ways to bring water to a field. Farmers around the world use this technique, and it’s even popular in industrialized nations like the United States.

Reed Hydromulch can help with your needs for irrigation in Texas! Contact us today – 817-929-5771

One drawback to flood irrigation is that poor techniques can result in a large amount of water being lost to evaporation, which is a troubling issue for drought-stricken areas around the country. Methods farmers can use to reduce evaporation include making sure fields are level, which helps water reach the entire field, as well as reusing runoff water by pumping it back into the fields after it’s used. 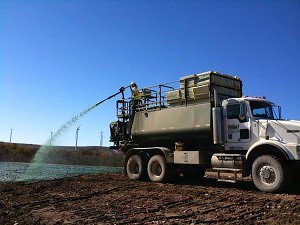 One of the biggest benefits of using drip irrigation is that it cuts down on evaporation that results in up to a quarter of the water being irrigated heading into the fields instead of the air.

Spray irrigation is another modern method, but it requires machines that deliver water in a spray above the crops. The concept is similar to holding a sprinkler over some plants at your house and covering them with water. For large farming operations, spray irrigation might feature a large line of spray guns that can move along the field and deliver water.

Why is Reducing Evaporation Important?

Evaporation can happen so quickly with some irrigation methods that the sprayed water doesn’t even make it into the ground and evaporates before it hits the soil. Wind can carry water away so that it doesn’t reach the correct area of the soil, which means the crops aren’t getting the water they need, and a vital resource is being wasted.

It’s important to use irrigation techniques that don’t result in excessive evaporation.

The National Agricultural Library, which is run by the USDA, reveals:

“Agriculture is a major user of water in the United States, accounting for 80 percent of the nation’s water use.”

Investment in irrigation techniques that help reduce evaporation is a laudable goal for everyone who uses water from the residential homeowner who enjoys gardening to the owner of a large-scale farm.